Go to content
×
Map of the location of US and NATO military bases in Spain
United States Air Force bases in Spain:
Morón Air Base on the map
Moron Air Base is located in southern Spain, approximately 56 km southeast of the city of Seville. The base gets its name from the nearby town of Morón de la Frontera while is located inside Arahal municipality territory.
United States Navy bases in Spain:
Rota Naval Station on the map
Naval Station Rota, also known as NAVSTA Rota, is a Spanish-American naval base commanded by a Spanish Rear Admiral and fully funded by the United States of America. Located in Rota in the Province of Cádiz, NAVSTA Rota is the largest American military community in Spain, housing US Navy and US Marine Corps personnel. There are also small US Army and US Air Force contingents on the base.
Spain: AVB " moron "(rotational special unit of the us Marines), VMB " Rota "(permanent deployment of ships with guided missile weapons (URO) of the US Navy); Torrejon (center for joint air operations of NATO). 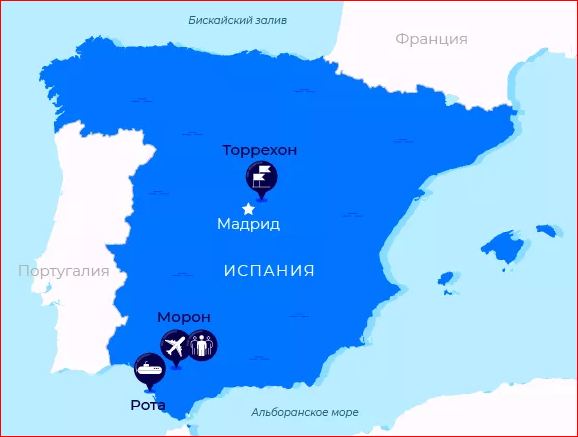