Go to content
Map of the location of US and NATO military bases in Belgium
The armed forces of Belgium
Map of the location of US and NATO military bases in Belgium
United States Air Force bases in Belgium: Chievres and Kleine Brogel air bases.
Belgium: Mons (strategic operations command of the joint armed forces, special operations command; NATO cyber operations center, Russia); Brussels (command of the us army garrison Benelux); AVB "Shyevr"; Zutendal (us Vivt warehouses).
Kleine Brogel Air Base is a Belgian Air Component military airfield located 1.5 km of Kleine-Brogel, in the municipality Peer, Belgium. It is home to the Belgian 10th Tactical Wing, operating F-16 Fighting Falcons, which are capable, among other capabilities, of delivering B61 nuclear bombs.
Chievres Air Base is a United States Air Force operated airfield located 1.9 km east southeast of the Walloon town of Chièvres in the province of Hainaut, Belgium and about 19 km from Headquarters, Supreme Headquarters Allied Powers Europe, in Casteau. It is mainly used to provide logistic support to NATO and SHAPE.  The station and support facilities are operated by the United States Army Garrison Benelux for NATO. 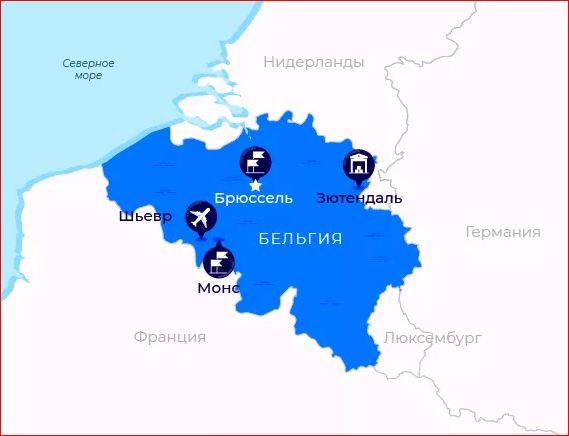 The armed forces of Belgium
The capital of Belgium, Brussels, is the capital of Europe: the headquarters of NATO and the European Union are located here. At the same time Belgium itself is permanently on the verge of disintegration. Its two main parts-Flanders and Wallonia-are essentially existing as independent States, and Brussels has a special status both in Belgium and in Europe.
In military terms, this country fully fits into the current European trends: large armies become small,
and the little ones almost disappear altogether. Belgium belongs to the second option. In the early 90's, its armed forces had 360 tanks, about 1,4 thousand BMP and APCS, about 400 artillery systems, about 200 combat aircraft. Today, this is small, but still noticeable the value has become almost imperceptible.
The Belgian armed forces consist of a Land component, an Air component, a Maritime component and a Medical component component. In the armed forces of Belgium there are more than 24 thousand soldiers and officers, as well as several thousand civilian personnel.
The Belgian ground forces have up to 850 BRMS, IFVs and APCS.
The Belgian artillery has about 200 guns and mortars.  Belgium's ground-based air defense system includes about 50 MANPADS.
As of the beginning of this decade, about 12 thousand people served in the land component of the Belgian armed forces.
In addition, about 2 thousand civilians worked in some positions. The Land component consists of three components
main divisions: Medium brigade, Light brigade and 2nd artillery regiment. All regiments are grouped into these divisions and battalions for various purposes. Thus, five motorized rifle regiments belong to the Middle brigade. The composition of the Light brigade is different, in it includes the light infantry regiment 12 ligne Prince Léopold-13 Ligne, the 2nd commando battalion, the 3rd parachute battalion, and the group special operations. It should be noted that in addition to two brigades and an artillery regiment as part of the Land component there are a number of other divisions responsible for intelligence, supply, maintenance of equipment, training of personnel, etc. All of them report directly to the command of the Land component.
At the beginning of the two thousandth years, Belgium took a course to abandon tracked armored vehicles. The most noticeable consequence of this was the decommissioning and decommissioning of Leopard 1A5 tanks. Decommissioned tanks are sold to third countries. For example, more than 40
the armored vehicles are planned to be transferred to Lebanon, but Germany is blocking such a deal for political reasons.
After the abandonment of tanks THE main type of armored vehicles in the Belgian Land component became mowag armored personnel carriers Piranha purchased from Switzerland. The total number of cars of this type in several modifications reaches 250 units.
The Belgian air force includes more than 120 aircraft and 30 helicopters. At the vvb Klein Brogel 20 American nuclear weapons are stored b-61 bombs, which in the event of war will be used with the f-16 of the Belgian air force itself.
For air defense, the ground component of the Belgian armed forces has several dozens of Mistral anti-aircraft systems.
After the recent reforms, the number of military personnel in the Air component of the Belgian armed forces has been reduced brought to 8,600 people. All available Belgian aircraft are grouped into several wings in accordance with their
purpose. Thus, units of the 1st air wing are engaged in pilot training, and transport aircraft serve in the 15th air wing.
Due to the specific views of the Belgian leadership on the role of the armed forces the Air component has
original quantitative and qualitative composition. To date, there are only 60 American-made f-16 Fighting Falcon fighter-bombers in this type of force. Initially, their number was equal to 160 units, but later a hundred aircraft were decommissioned and transferred to third countries. To perform intelligence tasks Agusta A109 helicopters can also be used for shock missions. Of the 46 received cars of this model currently only 22 are in operation.
The Belgian Navy includes 2 frigates, 2 unarmed patrol ships, and 6 minesweepers.
Belgium has access to the sea and therefore needs a naval force. The main task of the Marine component of the armed forces the task of Belgium is to protect the country's Maritime borders, which determines their composition. At four naval bases to which all available ships and auxiliary vessels are assigned, with a total of about 1,600 men serving.
In 2005, Belgium purchased two Karel Doorman frigates from the Netherlands. The Dutch Navy has operated these ships since 1991, after which they were transferred to a friendly state. The Marine component includes HNLMC Karel Doorman and HNLMC Willen van der Zaan were named F930 Leopold I and F931 Louise-Marie respectively. In addition, the Marine component includes the a958 Zenobe Gramme sailing ship and the a984 Alpha IV Royal yacht.
There are no foreign troops on the territory of Belgium (except for NATO staff members).
The Belgian army is capable of purely symbolic participation in police and peacekeeping operations of NATO and the UN and it does not provide for the defense of its own country at all.
Back to content