Go to content
×
Map of USA and NATO bases in Lithuania
Lithuania: Vilnius (advanced command and staff cell NATO); G. Rukla (a multinational NATO battalion, 1100; the rotary unit of the armored brigade of the U.S. armed forces); AVB "Zokniai", Siauliai (aviation within the mission of NATO air policing in the Baltic region – 4 fighter air force (VVS), Belgium); p. Amichai (warehouse of arms and military equipment (military hardware) the US); polygons in pabradė, Kairee, Kazlu Rudei Roque.
Lithuania: polygons near the border with Belarus
In Lithuania, a multinational NATO battalion is led by Germany. The Rukla military base is home to a German mechanized battalion, Belgian and Dutch infantry companies, a Czech mechanized infantry company, and a Luxembourg infantry unit, with a total of about 1,400 troops.
Most of the armored vehicles on the ground in Pabrade, right at the border with Belarus. The images show a completely new stand-alone platform with hangars, along which there are two dozen units of heavy equipment. The same number is on the base itself.
In addition to the NATO battalion, there are also American military personnel in Lithuania. However, it is not known how many of them are in the country as part of operation Atlantic Resolve, but warehouses for storing weapons and ammunition have been built in the Mumaichai area of the United States to provide them and incoming units.
Private object Amici is located near the airport in Zokniai under Siauliai, in Northern Lithuania near the border with Latvia. In the Google map images, as well as in Latvia and Estonia, you can see a brand new runway and six more modular hangars. There are two transport planes and four f – 16 fighters of the Polish air force in the Parking lots.
The Pentagon says that as part of operation Atlantic Resolve, 80 tanks, 120 Bradleys combat vehicles, 15 Paladin self-propelled howitzers, 10 CH-47 Chinooks transport helicopters, 20 AH-64 Apaches attack helicopters and 50 Black Hawks were transferred to Europe in Germany, Poland, Lithuania, Latvia, Estonia, Hungary, Romania and Bulgaria. In addition, another 1,500 trucks with various cargoes were delivered to Eastern Europe. However, most of the equipment is located in Poland and Germany, and it is transferred to the Baltic States for training.
Military exercises in Lithuania in 2020
Exercises in Lithuania in August 2020 Lithuania
Lithuanian military news for January 2020
December 2019 - AMERICAN STRATEGIC BOMBERS CONDUCT BOMBING NEAR THE BORDERS OF RUSSIA
December 2019-NATO military exercises in Lithuania 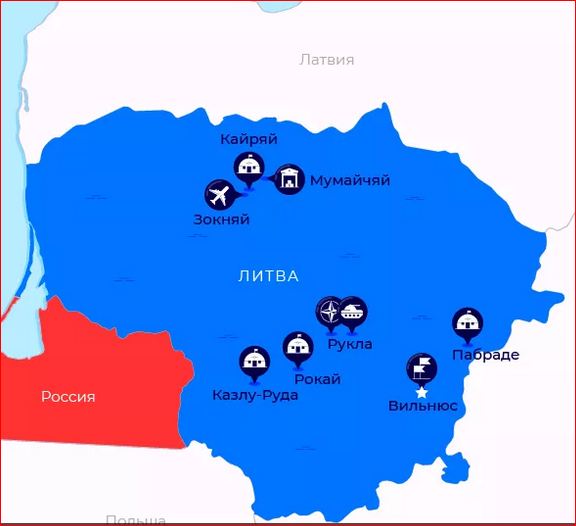